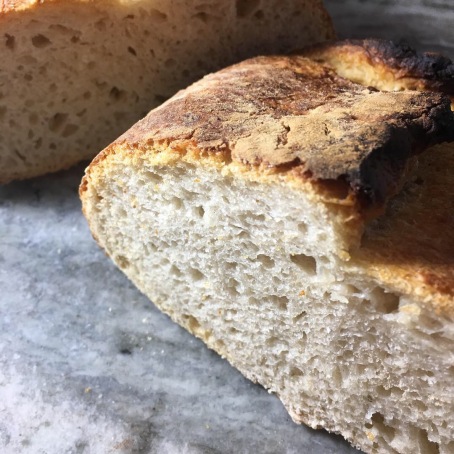 Some of my best food memories as a child, are of my family and I tearing chunks off a fresh loaf of bread from the bakery and dipping it in grandma’s Sunday gravy. We usually had to buy an extra loaf, one was for the dipping, and one was to be served with dinner, or made into garlic bread.

Bread has been around since pre historic times, and is the one food item that is seen in pretty much every culture on earth in some form. In addition to feeding mankind throughout history, bread has much symbolism in many cultures and religions. Think of the term, ‘breaking bread’, as well as religious rituals and traditions like receiving communion at church, or passover matzoh.

While looking for a simple recipe to make a delicious loaf of bread to dip in some Sunday gravy, I stumbled upon an interview with Jim Lahey of Sullivan Street Bakery in NYC and Mark Bitman from the New York Times. Lahey’s ‘no knead’ bread technique is incredibly simple and yields a very delicious loaf of bread. The hardest part about making this  recipe is that it is so simple, you find yourself thinking, “I’m doing this wrong, it shouldn’t look like this” or “I should mix it some more”. Fight that urge, it’s called ‘no knead bread’ for a reason.

In a large bowl, add your dry ingredients together. Mix them well with a whisk or fork so that your ingredients are evenly distributed, then add the water. Mix with your hand or spoon, just until mixture comes together. Then WALK AWAY. It will not look pretty or neat like you think it should, but avoid the temptation to overwork the dough. Grease sides of bowl with oil, cover bowl with aluminum foil or plastic wrap. Set aside at room temperature (68f-72f) for at least 12-24hrs, 24hrs is better. DO NOT punch down dough, just let it do its thing. After dough has risen flour a tea towel heavily, and turn out dough GENTLY onto the tea towel. Then flour the top of dough and gently fold all four edges of the dough ball inward toward the center, and flip the dough so the folded, “seam side” is down. Cover loosely with a tea towel and allow to rise again for 1-2 hours, dough ball should just about double in size. Place a dutch oven with the lid inside your oven, and pre heat to 500F, or as high as your oven will go. After your oven is pre heated and the dough has risen, carefully turn the dough out into the blazing hot dutch oven, so the seam side is now facing up. Cover with lid and let it cook for 30 mins in the middle rack of oven, then remove lid for 15-20 minutes, or until loaf has a beautiful chestnut brown crust. Finally, carefully remove loaf from the dutch oven and allow to cool.